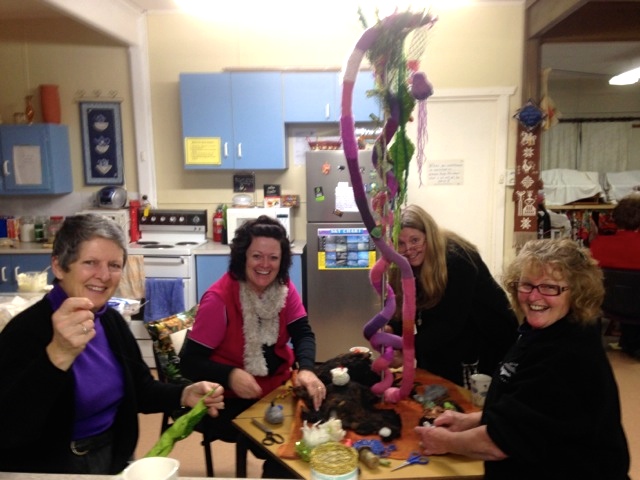 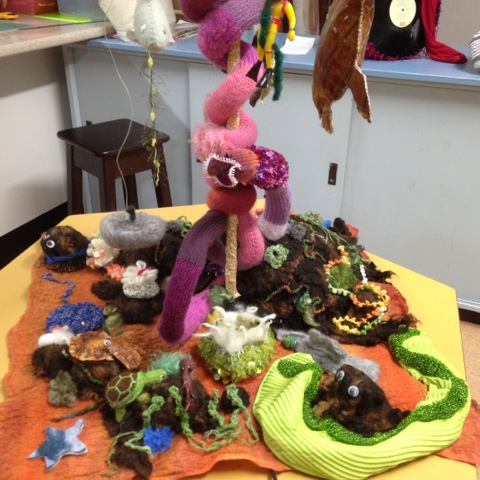 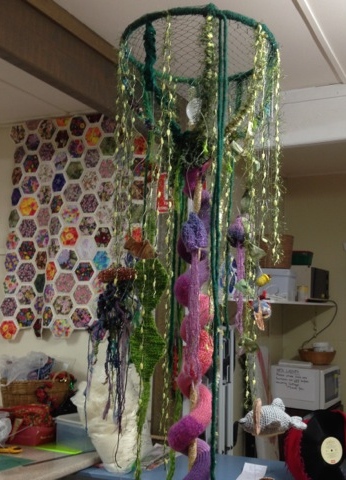 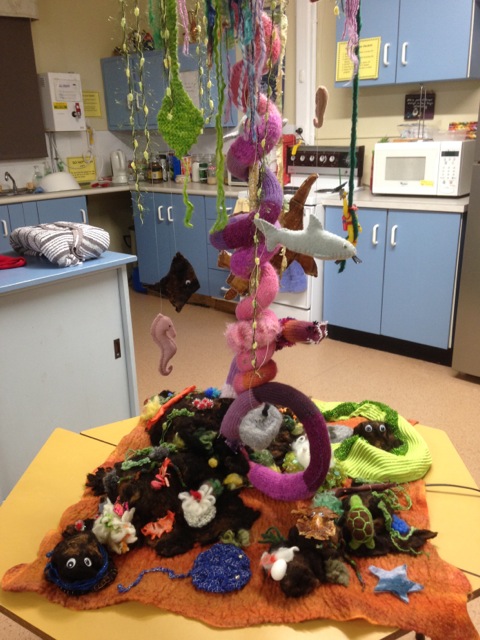 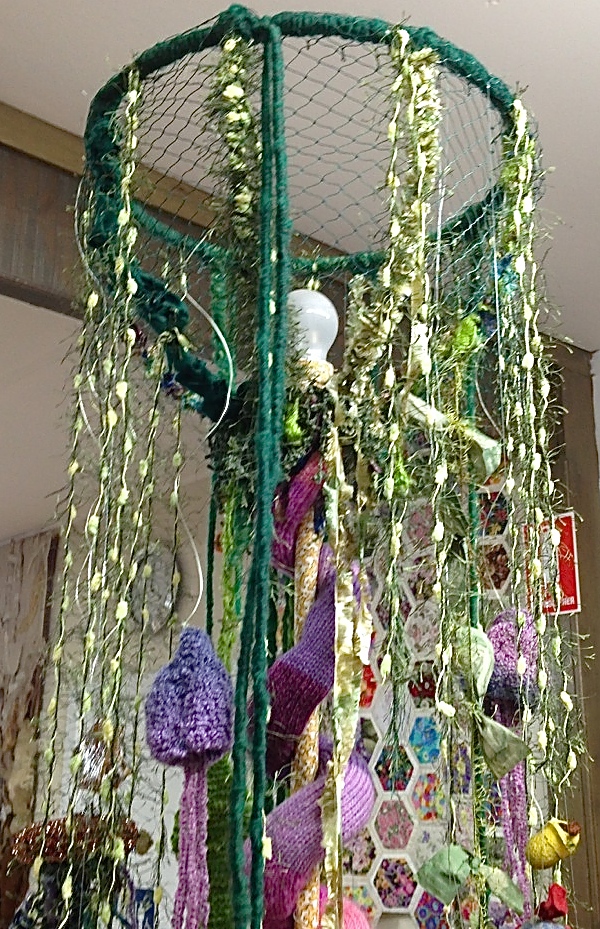 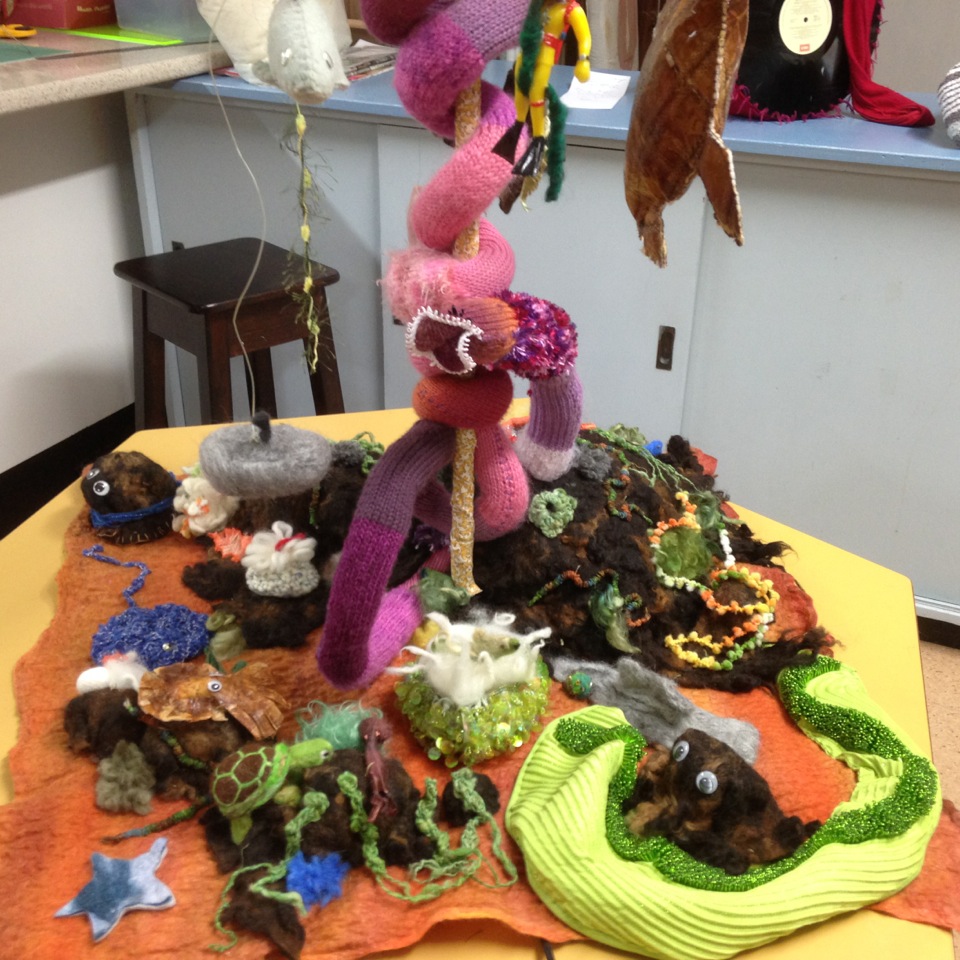 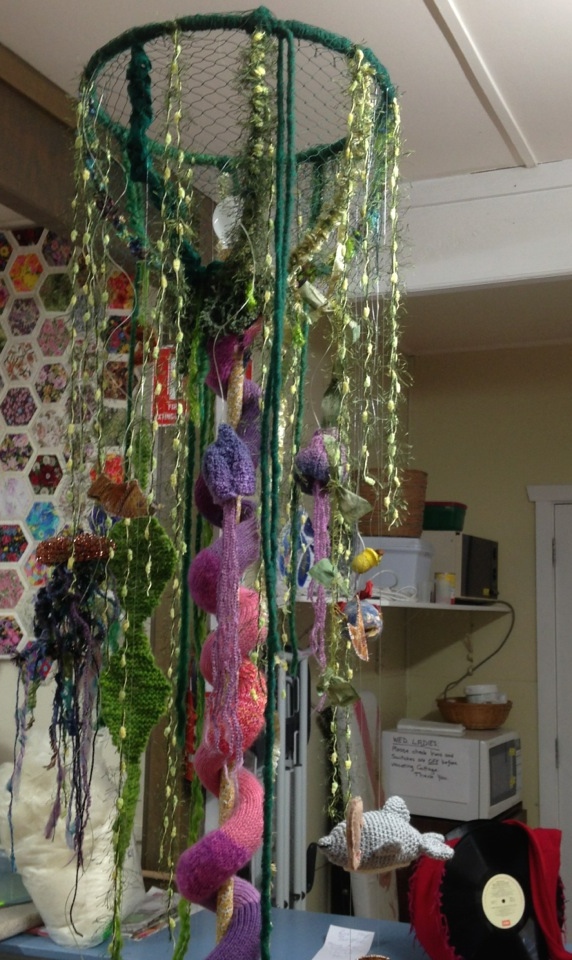 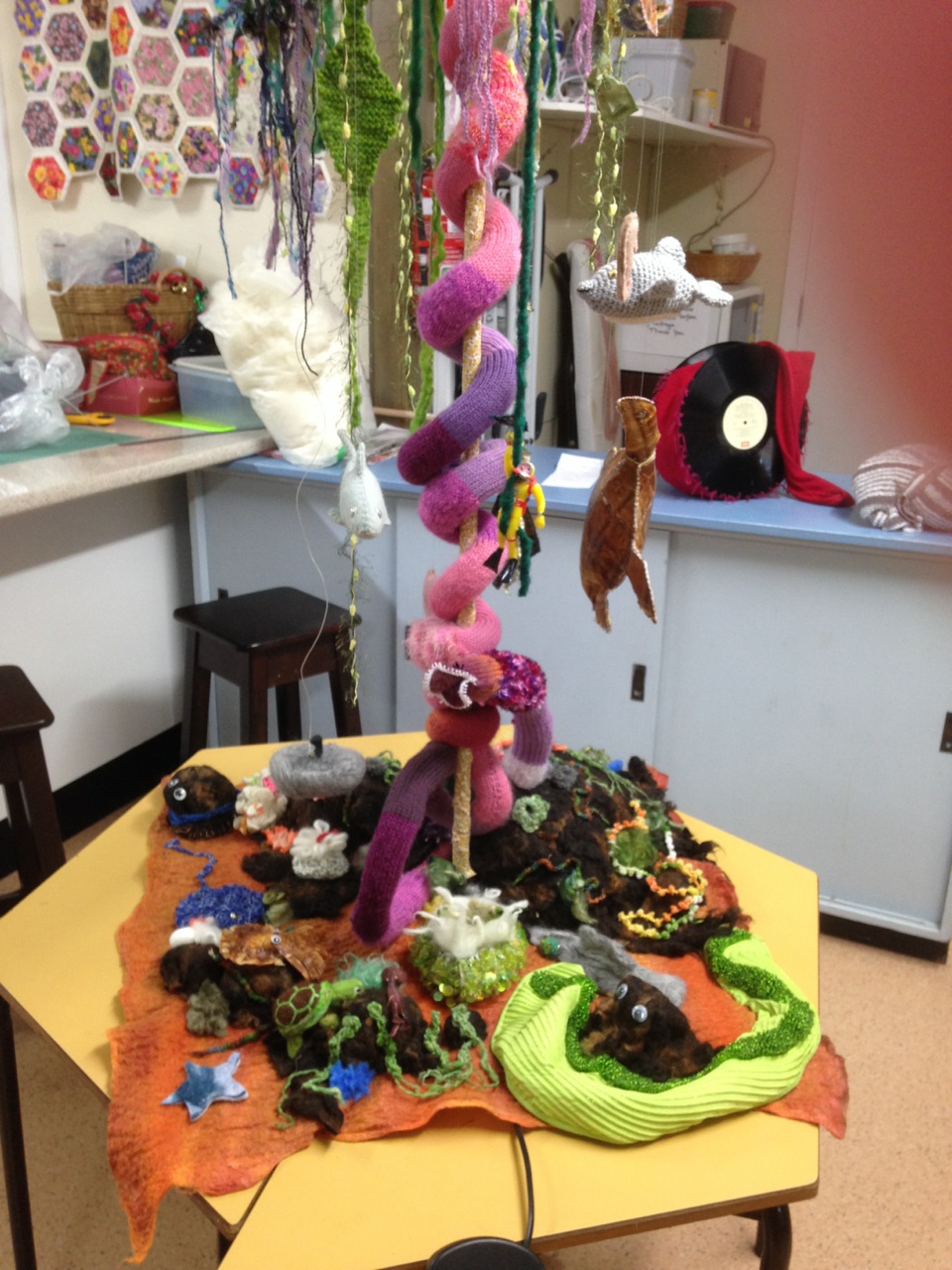 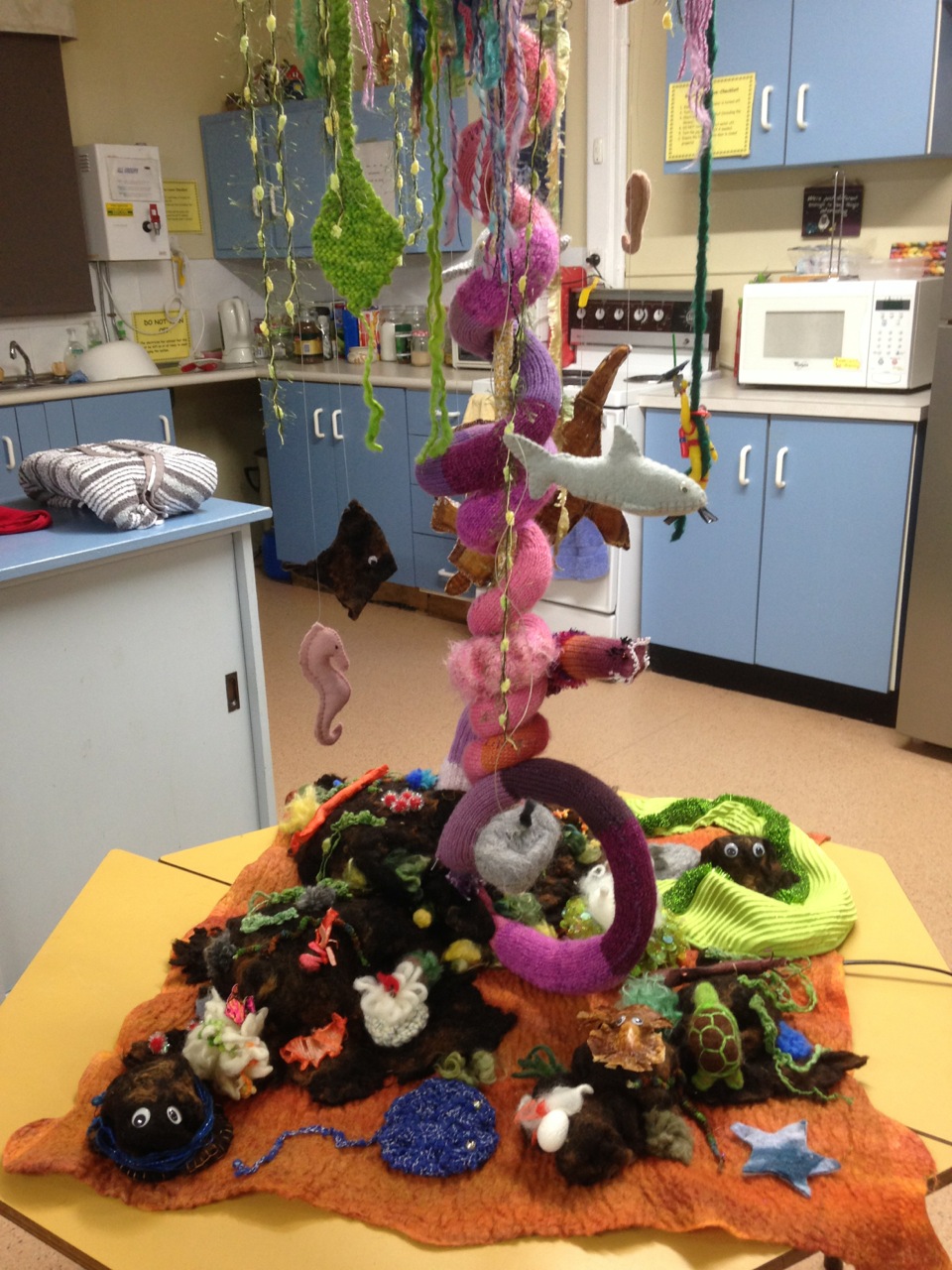 The Story of the Lamp

The lamp has evolved over time, as the best things so often do. It started from an idea in a felting book with a felted chandelier. While it was a great idea (and we were all for installing it in Lyn’s caravan), I didn’t feel it was something I was overly intrigued with – not particularly being a flowers and hearts kinda girl, which was pretty much what the chandelier was. Sometime later, I saw a standard lamp, which had been yarn bombed, and the wheels started to turn. Then on a trip to NZ, I saw Neil the Eel and the cogs started dropping into place. Many people have contributed to the making and ideas behind the lamp. Thank you all for your fabulous contributions.

Neila the Eel is the centrepiece of The Lamp. She is a ferocious moray eel. Named after my grandmother, Neila and related to Neil the Eel in Hokitika, NZ – an entrant in the annual Hokitika Sea sculpture competition (see below). Neila has beautiful eyelashes at the insistence of Jenny who felt that they were imperative. Debbie made Neila over several months.

Bruce the Shark is really an interloper. Named for the “Finding Nemo” character, he was purchased at a Rudolf Steiner fete. Knowing he is not quite welcome, he is keeping his teeth well hidden.

Dan the Diver is in disgrace. He has flouted the law and is hunting with a spear – not the done thing here! Worse still, he has killed a beautiful fish. Better keep an eye out for the Water Rats, Dan.

Kathryn made Sally and Cindy Seahorse. Subtle and serene (and also pink), they make ideal neighbours for Neila.

Jock the Jellyfish was made by Amanda. A photograph in an underwater publication inspired her and her creature is incredibly life-like. Watch out for those stingers!

Terence the Turtle is a fine example of textile art made by Lyn. Constructed from used tea bags – the technique is ingenious, making use of waste material – and producing such a realistic effect. Several smaller creatures are included on the lamp using the same technique.

Gay lovingly made Dorothy the Dolphin. Like all dolphins, she is gentle and kind. She is keeping a very firm eye on Bruce.

Jess and Jacinta Jellyfish are peaceful lilac creatures made by Lyn. They are much gentler than Jock (their cousin) who can be a bit bristly.

The shade itself was decorated by Jenny and Lyn and is reminiscent of a kelp forest. The piece of kelp was knitted by Debbie. The netting was an object found by Amanda.

Angie the Angelfish is an off-cut from the experimental felt used to make the rocks and caves.

Note the submarine (made by Lyn) making its way down toward the sea floor for exploration.

Percy the Puffer Fish was donated by Vicki W at the very beginning of the project. He proudly watches over us all.

On The Sea Floor

The sand is made from a Feltfine batt, which was wet felted onto fine netting. Due to the variations in the batt, you get a lovely effect, much like that of a sea floor.

The rocks and Neila’s cave were an experimental piece of felt made by Lyn. The colouring and texture have made for a perfect anchor piece for our work of textile art. As everyone knows, moray eels have their own cave.

Syd the Stingray was made by Fran. He stealthily sneaks along the sand.

Celia Cuttlefish is another teabag creation by Lyn. She has just popped out of her lair in search of some lunch.

Tommy Turtle is a lovely example of 3D needle felting made by Kathryn. He is busy grazing on his rock.

Uma the Urchin was made by Kay. All of that built-in bling has attracted an admirer.

Orson and Ossie are awesome Octopi who are perusing their garden. Orson is admiring the beaded landform (originally part of a hat worn at Royal Ascot). Ossie suddenly changed breed and became a blue ring octopus when Jenny thought she should be.

The HMS Adelaide is a local dive site in Avoca now creating a reef. As the lamp is presented as part of our Gathering, Lyn has included the HMS Adelaide. It has its own landmine – watch out!

There is a multitude of other small additions – sea worms, bugs, urchins, fish and all manner of creatures. All made by Lyn from a wide variety of textile art techniques. Materials used include gathered ribbon, silk cocoons, pom poms, silk rods, felt and knitted and crocheted objects.